Australia has a written Constitution - for its text see this page on the Senate web site, where it's nicely presented as one Chapter or Part per page. It imposes quite a number of real limits on the powers of both the Commonwealth and State parliaments and governments. To give just a few examples out of many:

But then there are the furphies, invented by bush lawyers who want to find a reason not to pay their taxes, to keep their gun collection, or not to obey orders of the Family Court. For those who don't know, in Aussie slang:

The idea that this sort of half-baked thinking about law occurs especially in the "bush" is consistent with what I hear about the spreading of these furphies. Most of the furphies seem to circulate more strongly in Queensland country towns than elsewhere - not so much in the far outback, but in the "provincial" districts between the capital and the far outback. If you live between, say, Caboolture and Rockhampton, sooner or later someone will try to persuade you that you don't have to pay taxes, obey Family Court orders, or whatever else, because the Constitution is invalid, the currency is invalid, or some other equally specious reason. Ignore them, and if they seem at least half-rational suggest that they should read this site. If they seem less than half-rational, just tell other people to ignore them and to read this site. 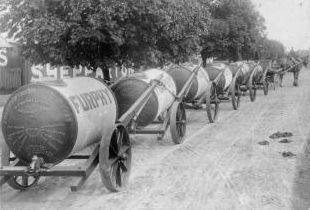 I will be posting a separate page to debunk each of these furphies - one furphy after another, just like in the picture... A link means the page has been posted; an item without a link means that you can take my word it's a furphy and the page of reasons is coming soon.

The Magna Carta Myth and Baloney about the Bill of Rights 1688. The link is to a chapter of my half-finished web text on constitutional principles. Once you're there you'll be able to read the earlier chapters as well, but you'll find that there's nothing after Chapter 6 yet.

The Treaty of Versailles furphy

The Constitution is part of a British Act of Parliament (true), but Australia became independent when we signed the Treaty of Versailles in 1919, and British laws can't apply to an independent country. Therefore the whole Constitution is invalid, therefore we don't have to pay our taxes.

Section 115 of the Constitution says "A State shall not coin money, nor make anything but gold and silver coin a legal tender in payment of debts" (true). Therefore the paper or plastic currency is unconstitutional, therefore we don't have to pay our taxes, or at least we can insist on paying them in gold and silver coins.

The 'local government is not recognised in the Constitution' furphy

The Constitution mentions the existence of the Commonwealth government and State governments, but has no reference to local government (true). Therefore local governments have no power to make by-laws or local laws, therfore I don't have to pay my parking fines.

The Self-Determination of Peoples is a recognised principle of international law (true, though its application to particular cases is often disputed), therfore I can secede and form my own independent principality, therefore I don't have to pay my taxes.

[Is anyone noticing a theme here?]

The "The Castle" furphy

The Constitution says the Commonwealth must pay just terms when it acquires property, and it's an old principle of English law that "a man's home is his castle" (both true), therefore no amount of money would amount to just terms for Darryl Kerrigan's home, therefore the Commonwealth can't compulsorily acquire it.

The Constitution guarantees freedom of religion (true in a sense), and on my reading of the Bible it

Also see my General Harangue on statutory interpretation, on the need to read every word of a section, and read it in the context of the rest of the statute and in the context of the whole legal background. It's mainly illustrated by references to the legal tender furphy, but it applies to every law and legal document you might read.

Rely on any of the above furphies and you will get into trouble with the law! Rely on the "I don't have to pay my taxes" ones and you will end up bankrupt when the ATO gets you into the courts! I have written this at the request of a lawyer who has acted for people who have lost their houses when the ATO has come after them, and they have only seen a competent lawyer when they're too deeply in debt to be saved. There are cases where a supposed law is unconstitutional and someone being sued or prosecuted under it can successfully argue that it's invalid - but get legal advice from a good, properly qualified, lawyer before you try.